There is a time for everything,
and a season for every activity under the heavens:

This year began with celebration! Once Celia and Keith and Colin and Jiayun returned from their Christmas trips, we celebrated Christmas as a family... by pounding Mochi with a special Mochi pounder that Colin and Dan made. (Mochi is a Japanese treat made from rice) 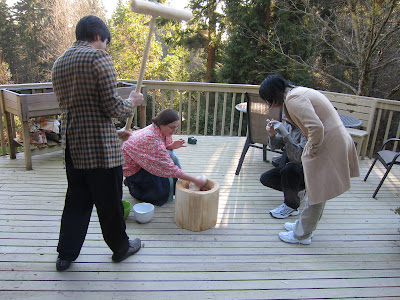 And Colin and Jiayun shared the exciting news that they had become engaged while in Texas!

Soon after, we celebrated my dad’s 90th birthday with family and a few friends. It was a special day for all the family. 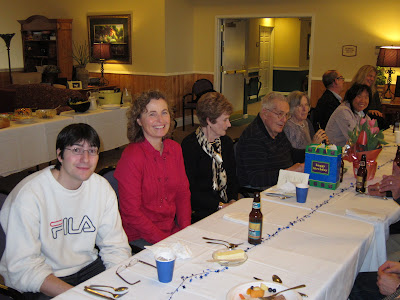 …a time to mourn…
Mom passed away on March 16th. We had watched helplessly as she went downhill physically and mentally over the past year, but her death still took us by surprise. The grief I experienced was a continuation of the grief I had felt for the past eight years as Mom had slowly succumbed to dementia, but now it was final. Dad was devastated, and needed much care and encouragement. An earlier blog post gives my tribute to my mom. This picture captures the special relationship she had with her four grandchildren. 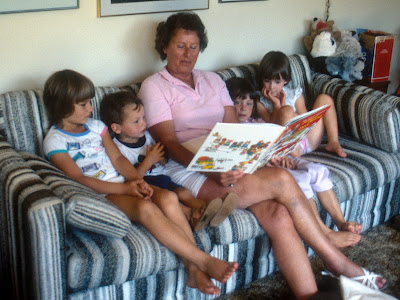 It was a blessing that Celia and Keith were still with us; they provided much needed support for me. They had become very involved in ministry with Japanese people through the “talk time” and “Alpha” programs at Westminster Chapel. They also attended a Japanese church that met at Newport. By March they were ramping up their activity around their “deputation”, in order to raise the support they needed to return to Japan. The earthquake and tsunami had brought Japan to everyone’s mind and attention. In early April they held a “Japanese Culture Night” at our church. It was a very fun event with great Japanese food, a tea ceremony, music, and an opportunity to share their plans with about 100 people. On the very day of their deadline for a July 1 departure, they reached 100%. It was definitely a God thing. 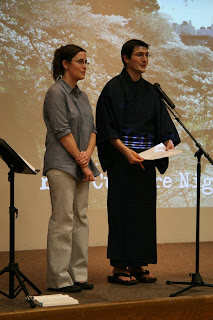 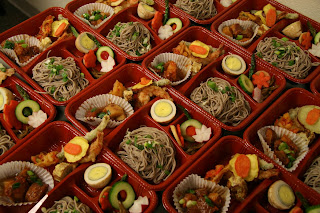 …and a time to dance

On May 21st, Colin and Jiayun were married at Newport Covenant Church. The wedding was very unique. About 10 people read the chosen scripture in different languages. Colin served tea to Jiayun’s parents and Jiayun served Dan and me. We are enjoying getting to know our new daughter in law, and we’re glad they live nearby. 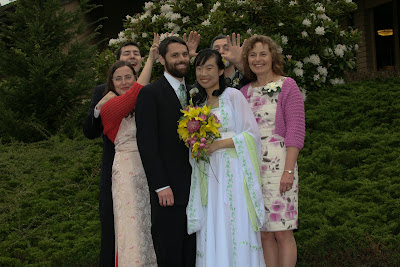 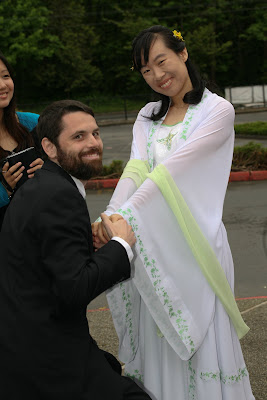 Just a week after the wedding we journeyed to China to complete the celebration with Jiayun’s extended family in Shanghai. Besides Shanghai, we also visited Beijing and Yunnan province. In Beijing we were escorted to the great wall by a friend of Jiayun’s father, learning firsthand about the generous hospitality that is extended in China. 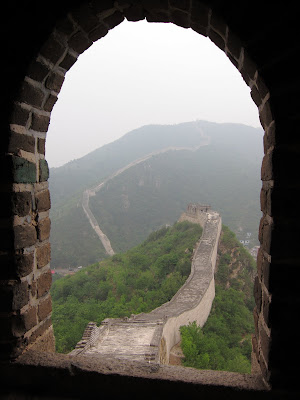 In Dali, Yunnan Province, we enjoyed the hospitality of the father of a UW student whom Colin and Jiayun know well. Touring with him for two days gave us a feel for the beautiful rural countryside, and a taste of the local cuisine. 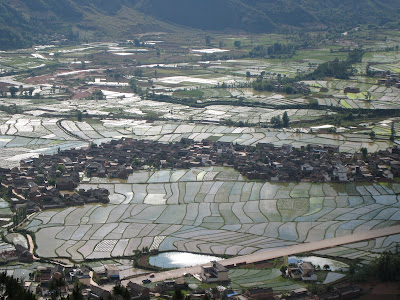 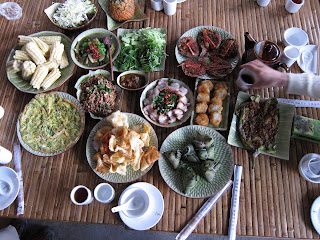 And then the big adventure: a five day trip to the edge of China with several Tibetan tour guides. Destination: Yubeng, a village at 11,500 feet at the foot of Meile Snow Mountain. In order to get there, we had to drive through road construction for 100 kilometers. And I mean through road construction – over the unfinished road bed, through clouds of dust, among the workers and machines, with no flaggers. We stayed in a Tibetan-style hotel on the top of a ridge and woke up to this scene in the morning.

From there, we ventured down to the Mekong river, then to a trailhead, where we hiked from 9,500 to 13,000 feet and halfway down again. Yubeng is ethnically Tibetan, although in China. It was very, very rustic, but what a view. This was by far our most foreign experience ever. 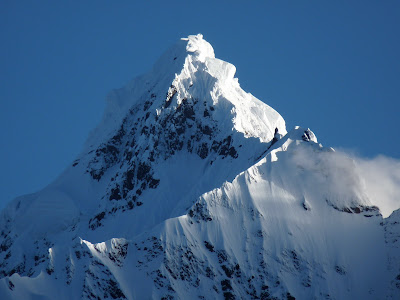 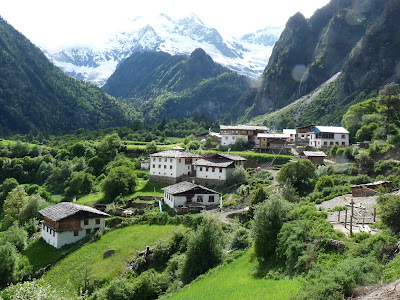 In Shanghai we celebrated Jiayun and Colin’s marriage with both sets of grandparents, three aunts and uncles, and several cousins. Even though we weren’t able to understand each others' language, I felt that we communicated well our mutual love and well wishes for Jiayun and Colin. Several times while we were there we were invited to share lavish and artful meals with family and friends. The nice restaurants in Shanghai have many rooms for private parties, and most entertaining seems to be done in this fashion. 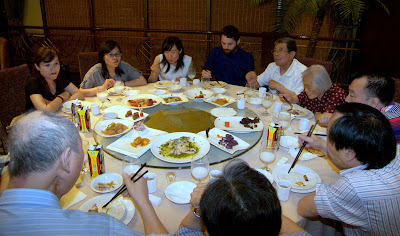 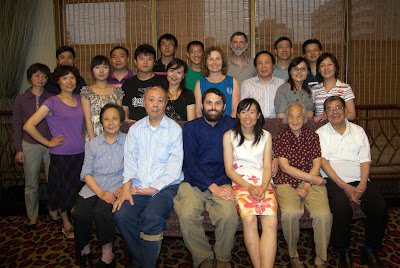 …a time to plant and a time to uproot

Celia and Keith were in the throes of packing when we returned. We took them to the airport on June 30th. We were all excited for them, but of course, we were also sad to see them go.

At that point, all the losses and changes and exhaustion caught up with me, making for a difficult summer. But God was true to His promise to bring growth in our lives when things are difficult. I stayed very close to the Lord during this time of grief and sorrow. And I am happy to say that I am feeling much better now. I have resumed my work with KidREACH, the after school tutoring program, and I am very passionate about this work. 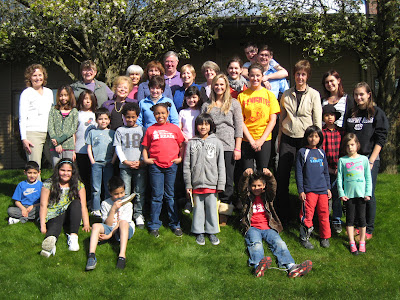 I also started taking voice lessons consistently, and have been encouraged by my improvement. I can now sing (most of) the high notes in our Opus 7 concerts.

Dan has immersed himself in music through performing in Opus 7 and an early music ensemble, taking guitar lessons and building instruments. He has completed a guitar, an ukulele, 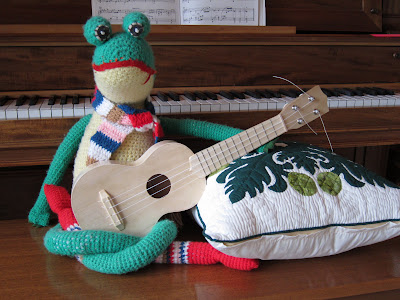 and is now working on a shamisen. He attended the American Luthier’s convention this summer and the Midsummer Musical Retreat. He doesn’t seem to be getting tired of retirement, and I think he would say, like many others, “How did I ever have time to work?” 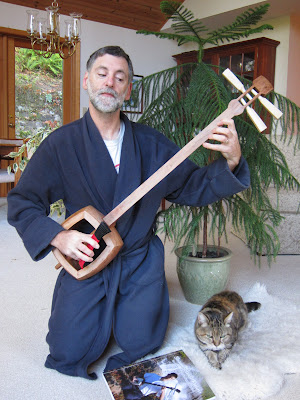 ...a time to wander and a time to come home... (that's not really in Ecclesiastes, but it sounds like it could be)

After the big trip to China, we enjoyed taking some local trips. We never tire of the beautiful places to visit in the Northwest, and haven’t yet run out of new places. We took my Dad to the San Juans in July. 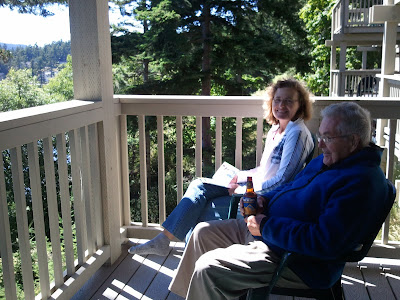 In August Dan and I took a week long camping trip to Hood Canal to canoe and hike. The weather was spectacular, the water was warm, and the wildflowers in full bloom. Couldn’t have been much better. 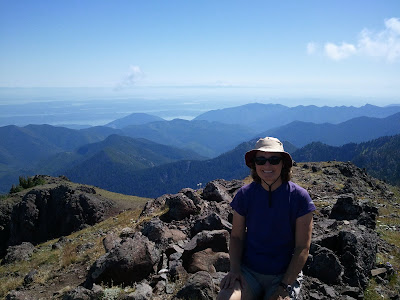 In October we visited the west coast of Vancouver Island. 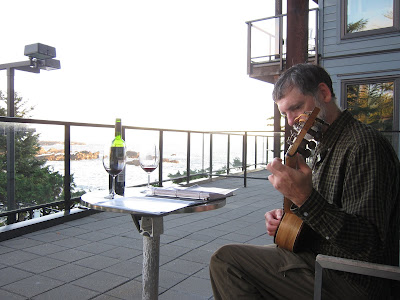 So there you have it. If you are still reading this long tale...

We wish you a very joyful Christmas and a blessed New Year!

Joann and Dan
Posted by Dan and Joann at 4:47 PM

Congrats on Colins wedding. Very exciting. Johann is nearly 17. They grow too fast.

Lori and I returned to the Yukon river this year. Big plans for next year in the NWT. Looking fwd to my turn at retirement. See or blog for our trip from this year and last. RubiKon Adventures