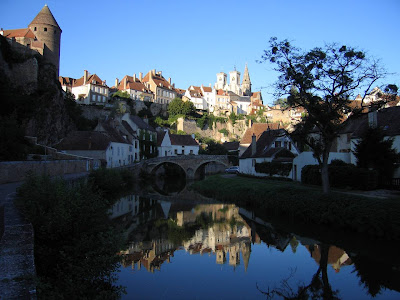 Our last stop in France was a lovely town called Semur en Auxios. Almost completely surrounded by water, it was the ideal location for a fortified city. We had a four-course French meal at the hotel. It began with a salad, then the entree, followed by a selection of cheeses, and finally dessert. By the time dessert came, we were totally stuffed, but some of us managed to choke it down. I think Dan finished his and helped others, as well. I ate all of mine. 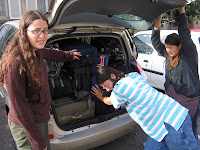 By this time we had bought way too much stuff, and the car just kept getting fuller and fuller.... Five of us and all our luggage in a Renault Scenic was a challenge. 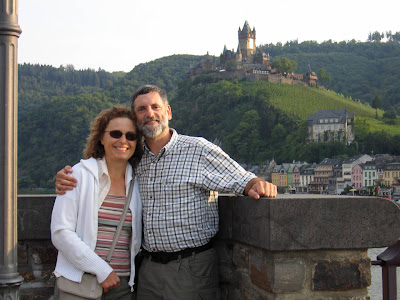 We spent a day driving along the Mosel River, sampling (and buying) wine and stopping often to wander through a town or walk to a viewpoint. It was one of our favorite days. Dan and I are standing across the river from the castle in Cochem. 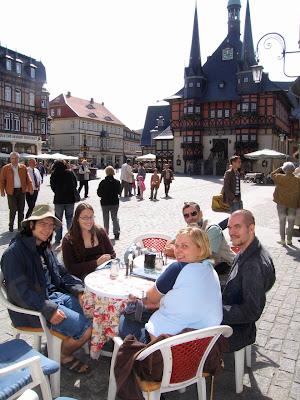 Now we're in Wernigerode, about to enjoy ice cream on the town square with Franziske, Rene's sister, and her friend Dominic. It happened to be Dan's birthday that day, and everyone except Dan forgot about it. Oops.

From there we went to Kassel to see Rene and Helge, and their baby, Fabian. Rene lived with us for a year as a high school exchange student, and we had come to Germany to share in the celebration of their wedding. 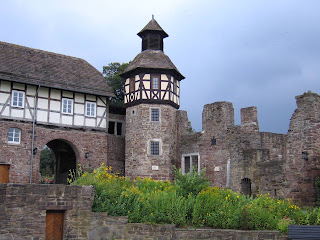 The celebration lasted from Friday evening until Sunday, at the Wasserschloss Wulmersen, a castle turned hostel. On Friday night there were probably 50 of us gathered for a bratwurst BBQ and bonfire. The brats were wonderful, and so were the cheeses and breads. We met several other people who didn't speak much German - a couple from Iceland and a brother and sister from France. We had a fascinating conversation about our respective cultures. We also met Rene's relatives.

Saturday was wedding day! It started with a great assortment of breads, cheeses and meats for breakfast. Then we all drove to the Rathaus (town hall) in a nearby town. 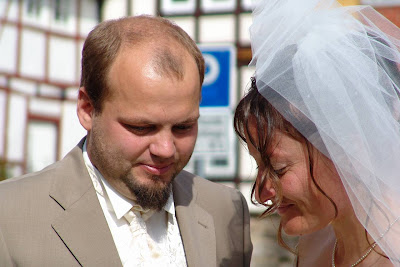 Helge and Rene, about to ascend the stairs into the Rathaus. 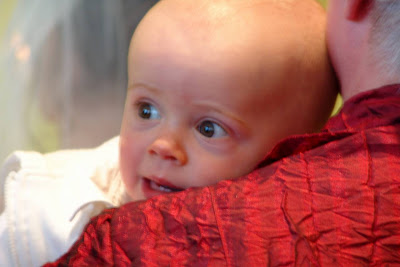 Their baby, Fabian, was there for the ceremony in Grandmother's arms. He got as much attention as the bride and groom. 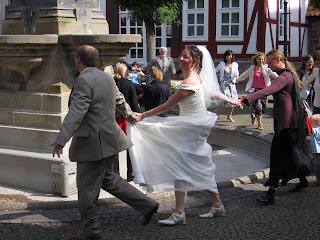 After the ceremony, there was a toast and then we went out to the town square where there was music and dancing.

We caravaned back to the castle, honking our horns and getting lots of attention. The rest of the day was filled with games, a wonderful buffet with roast pig, dancing, drinking, and singing. Rene is popping the balloons with his hat, which has a thumbtack on the top. Helge's job is to catch the money that was inside. People found many creative ways to package money for 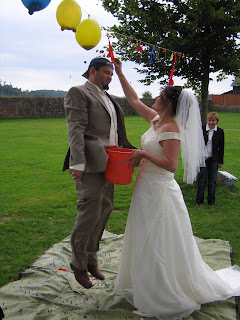 Helge and Rene, including a bottle covered entirely with thumbtacks (points sticking out) and tongs also covered in thumbtacks.

One of the things I especially enjoyed about the wedding celebration was the time we had to talk with people from so many different places and circumstances. Rene and Helge have great friends.

And we were really pleased to see Rene so happy with his bride and with his son. He'll be a terrific husband and father.
Posted by Dan and Joann at 8:10 PM No comments: